1.That I don’t have to constantly run around, trying to accomplish things. Lying in bed staring at the ceiling is a valuable part of life too.
2. To eat when I’m hungry, and that eating when I’m not hungry isn’t going to help starving children.
3. That there are so many more important things to do than keep the house clean.
4. That I can love people with all their flaws and contradictions, but I can’t change them.
5. To love myself as much as I love other people.
6. That it’s okay to say no.
7. That wherever I go in life, I can always come home.
8. That no matter the gender, race, or religion of the person I fall in love with, my family will love them as long as they treat me well.
9. That people are their best selves when they have no other choice.
10. That my spiritual beliefs will probably change and fluctuate all my life, and that’s fine.
11. That the media bombards me with messages that I’ll never be pretty enough or thin enough, but I shouldn’t believe them.
12. That normal is boring. All the best people in the world are weird.
13. That I probably haven’t reached the best time of my life yet, and thank God for that.
14. To stop worrying about making a fool of yourself.
15. To take chances, make mistakes, and get messy.

On days you can’t remember

On days you can’t remember who she was,
you disinter the pictures (you don’t want to!),
then focus on benign peripheries,
so that the first contritenesses that haunt you

will show themselves banal: ‘whatever happened
to that armoire?’ ‘That dishwasher broke down.’
‘I miss the velvet couch.’ ‘I wish we hadn’t
let the thistle overrun the lawn.’

Entice your vision toward more pointed hints:
Salute the crib, the changing table. Welcome
a glimpse of diaper bag. Recall its scents
of disinfectant, sour milk, and talcum.

You deftly sidestep ‘what’s she thinking here?’
and ‘does she know it’s me behind the camera?’–
yet trip on ‘why such tangles in her hair?’
and ‘did we never change from our pajamas?’

Retreat beneath the quilt her grandma made.
Review the popup book, rewind the mobile.
Respin the top, recoil within the bed.
Renurse, resing, resigh, relaugh, rebabble.

And, should you need to, build a sturdy house
of quatrain stacked on quatrain. Window-free
at last, live lyrically, your mind diffuse–
all squinting rhymes and harmless frippery.

Go, dear one. Pile words one upon another.
Form thick iambic castles, if you wish.
You have the right, love—you who were her mother—
to veil what life remains in artifice. 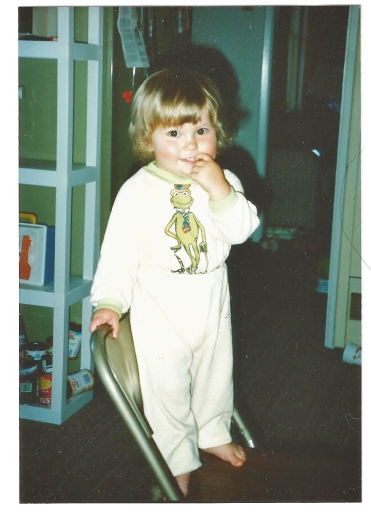 Cleaning house yesterday, on a forgotten shelf I found a shirt of Hannah’s. A stretchy Goodwill t-shirt, powder blue, with folksy flower-seed-packet art on the front. Minor stains, of course, plus a hole in the back collar where someone (I?) had clumsily lopped off the tag. [Shirt tags made Hannah itch.] I held the shirt to my face and breathed it in like an idiot seeking the flowers. But no, it was just that the shirtfront–and then the shirt’s inside–was the only part that hadn’t been exposed to nine years of dust.

And I believed the shirt still smelled like Hannah, believed that I could know–could grok*–her presence, her self, merely through these greedy inhalations of not-quite-random air. I sat on my bedroom floor and pulled the shirt onto my head (think of a blind bank-robber), and then, to a point far past absurdity and fast approaching asphyxia, I breathed in and out its ineffably Hannah smell. (Must, dust, detergent, every mundane staleness, but something of her there too–something.) I chose to feel myself awash in her essence. As in the many dreams I’d dreamed, hope-caught, throughout her life, I felt free once more to slip beneath the surface of Hannah’s embryonic, oceanic world, and to breathe, however feebly, underwater.

I chose to feel–and to believe–all this on such a primal level that the mind had no clue of the choice till it was made. But with a shrug, quite used by now to the heart’s vagaries, the mind humored us both. I nuzzled for one last deep second against the thread-worn seams that defined the shirt’s armpits. Then I pulled the shirt off and held it awhile. I dusted it, refolded it, and–ah, my darling girl, now what to do? Replace it on the forgotten shelf? Cleave it into rags? Throw it away? I couldn’t, can’t, decide this yet.

*Grok /ˈɡrɒk/ is a word coined by Robert A. Heinlein for his 1961 science-fiction novel, Stranger in a Strange Land, where it is defined as follows:

Grok means to understand so thoroughly that the observer becomes a part of the observed—to merge, blend, intermarry, lose identity in group experience. It means almost everything that we mean by religion, philosophy, and science—and it means as little to us (because of our Earthling assumptions) as color means to a blind man.

“Love without sacrifice is like theft.” —Nassim Nicholas Taleb 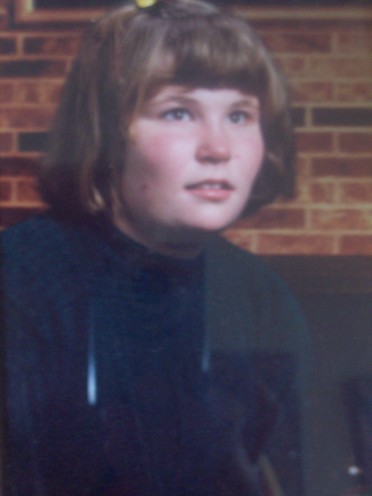 When I say goodbye­–when I try to say goodbye—they put their arms around me, one from one side, one from the other. And they cling there. Henry says, Okay Beck, here’s the plan—we don’t let go and she never gets away.

Becky had a dream–she and Henry were chasing me.

It takes such courage to let me go—I must have done something wrong. It should be easier than this. Their lives shouldn’t suspend themselves in midair when I’m out of sight. It all makes me very nervous—I hate the goodbyeing. The long drawn-out process, the hug I have to wrench myself away from, the sad faces, hurt faces as if I’m betraying them by wanting something separate. I can’t walk into a room without their watching my every move. Today Becky tells me her tale of woe. Then Henry walks in and says, “When she’s done complaining to you, I get to be next.”