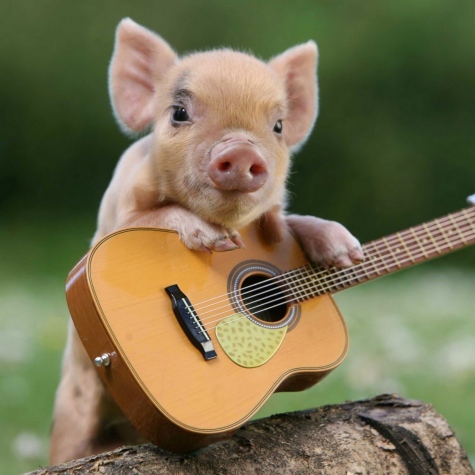 I played guitar today. It thrills me to see myself getting better–not great, not even “good” yet, really– but that’s not the point. The point is just to play better. As with my whole little life these days, I’m not trying to “win” anything anymore, and in fact I don’t know what in the world would be worth trying to win. Besides love, I guess–but the way you win love is to give it, which is simple enough once the ego shuts up, and hardly worth worrying about. Everything else—everything, yes? Everything else is a game. And maybe love’s a game too, I don’t know. Love’s just the horse I rode in on, and she’s served me so well that I’m bound to ride her home again.

So with love’s possible exception, everything’s a game. But you’re not there to “win” or even to “lose.”  You’re only there to play, and if it’s a fun game, like playing guitar, “losing” is a precursor to, and forever concomitant with “winning”: you might as well think of them as inseparable halves of the same activity. With a game like guitar, I’m working hard to beat my best score, but if–every other minute or so–I didn’t fail at that, I probably wouldn’t find it worth the effort. It’d be like, say, driving—a game I’ve mastered well enough, have no reason to “practice” for its own sake anymore, seeing as I’m not likely to get any “better” at it by staying late after school. Driving, therefore, is for me a simple, useful, but rather ordinary game. Breathing too: I imagine I’m about as good now at breathing as I’ll ever be. Hell, for all I know I’m at the utter peak of my aptitude for breathing, and it’s gonna be all downhill from here.  But guitar—oh, there are so many levels I haven’t gotten to yet, and then too, there are a few levels I have finally reached, plus many more I can glimpse just a few yards up the hill. Yes, but even the view from right here is breathtaking.

Amazing how fulfilling it is just to play the games of life without needing them to “mean” anything. In my roles as a game-player, singer, writer, a friend/wife/mother/human, etc., I’m always just trying to beat my best score. Lots of times I fail—that’s how a fun game works—so then I push “reset” and start again. The trick—my wisdom of the day–is to stop making the same old mistakes. You can’t get anywhere new that way, as I see it. No, if you really want to beat your best score, then you have to start making brand-new mistakes, and lots of them.

The other trick is not minding the obvious fact–once you think about it for even a second—that all your wins and losses are small and temporary and have barely even the meaning you give them yourself. It’s not—I used to think it was, but don’t anymore–that in the end we all “lose” (picture Trump’s gold-plated coffin). No, I have a feeling, these days, that there’s no end at all. Or that whether there is or isn’t, I myself will never know, so I might as well relax already.

2 thoughts on “win/lose (a diary entry)”